Flea Beetles Getting You down? These small hopping insects are a common problem in gardens around southern Manitoba, and they can cause big trouble for crops such as radish, kale, broccoli, mustards, horseradish, arugula, hosta and other popular plants. While very frustrating, there are a number of ways to reduce the damage caused by this pest. 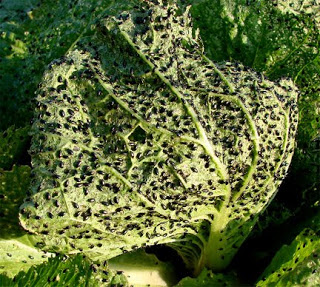 Flea Beetles can easily be identified as they converge on specific plants, and look like dark brown or black hopping fleas. They cause most of their damage by munching on plant foliage, and almost always occur en mass.
In Manitoba, Flea Beetles are strongly associated with canola, and swarms of the bugs often arrive in Winnipeg after crops are harvested from surrounding farm land. The insects overwinter in plant debris, and larvae emerge in late spring where they feed on plant roots. Once the young beetles have matured to adult stage, they become highly mobile and start to feed on the plant leaves. The adults go on to reproduce, giving rise to up to 2 generations per season.

There are five proven strategies for dealing with flea beetles without using heavy duty chemicals (which do not work well anyways!):


1) Crop rotation. If possible, avoid replanting susceptible varieties in the same location each season. The life cycle of the beetles is severely disrupted if the emerging larvae have nothing to feed on, and they will die off before they can mature to reproductive age.
2) Beneficial Nematodes. Native species of nematodes can be watered into the garden where they eat up the larvae. This is highly effective at stopping the emerging (first generation) of the beetles. Beneficial nematodes can be applied once soil reaches 10 degrees Celsius.
3) Row Covers. Floating row covers are light weight fabric blankets that are placed over crops to create a physical barrier against pests. Row covers are left over top of plants 24/7 as young plants get established; once plants are well established the row covers can be removed. Row covers allow light and water to get through so plants develop normally under cover. The fabric can literally be "floated" over plants and secured on the edges and ends, or may be draped over hoops to create a more spacious growing space. Row covers are one of the most effective tools for preventing damage from Flea Beetles. This solution is ideally paired with the first two, to ensure that beetles do not emerge under the row cover.
4) Mulching. Mulches such as straw or shredded newspaper are know to reduce Flea Beetle occurrence by making it difficult for the larvae to emerge from the soil. Planting non-susceptible crops among susceptible ones as a "living mulch" is another variation on this theme. The living mulch concept is thought to confuse the beetles who normally identify their target plants based on the contrast between the leaves and surrounding soil.
5) Safe Insecticides. In situations where many adult Flea Beetles are present, Safer's End-All can be applied. This is a pyrethrum based insecticide and is approved for use on edible crops and organic production (but should not be sprayed where fish or birds are in close proximity). To be effective the spray must come into direct contact with the insects; there is no residual effectiveness. Another insecticide that is used against Flea Beetles is diatomaceous earth (crushed fossilized diatoms); it is applied by sprinkling onto afflicted plants. This is a completely non-toxic solution that works by physically "scuffing" the joints of the insects, leading to desiccation and thus the demise of the bugs!
It must be emphasized that trying to kill off a flea beetle infestation is not a long term solution, particularly for later season occurrence, as more beetles are likely to fly into your garden to pick-up where the dead ones left off. The main benefit of using Safer's End-All or diatomaceous earth is short term reprieve for your plants.
As a final thought on managing Flea Beetles, end of season clean up is considered particularly helpful. If there is little plant debris left in the soil, the beetles have a hard time surviving the winter or feeding if eggs do hatch come the spring. Some experts recommend tilling under gardens where susceptible plants are grown, but this is at odds with good organic soil management (zero till is healthier for the soil micro organisms and structure) - so pulling up of finished plants is a better strategy.

← Five ways to answer the question: what is the "best" tomato? Can you taste it? Home grown figs are just a container away! →